Chemical reduction of prochiral ketones to the corresponding enantiopure alcohols has been investigated with great success[1]. However, those catalysts lack enantioselectivity for the reduction of long-chain aliphatic ketones[2]. Biocatalysts often show a better enantioselecitivity even with these relatively difficult substrates. However, biocatalysis often results in low volumetric productivity due to the restricted solubility of many substrates in aqueous solutions. To enhance the solubility of the substrates, the benefits from using a water-miscible solubiliser are demonstrated, as well as the possibility to recycle the aqueous stream to reduce waste and save costs. 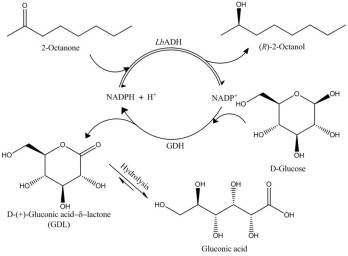 The enantioselective reduction of long-chain ketones (2-octanone to 2-decanone)[3] has been investigated in an enzyme-membrane-reactor (EMR)[4] using a (R)-selective alcohol dehydrogenase from Lactobacillus brevis (LbADH)[5] with a glucose dehydrogenase from Bacillus spec. (GDH) for in situregeneration of NADPH (see Fig 1). To enhance the solubility of the substrate, an ionic solubiliser was successfully used. In a setup with a cascade of two EMR and product removal via solid phase extraction (SPE), recycling of the aqueous solution was carried out (see Fig 2). 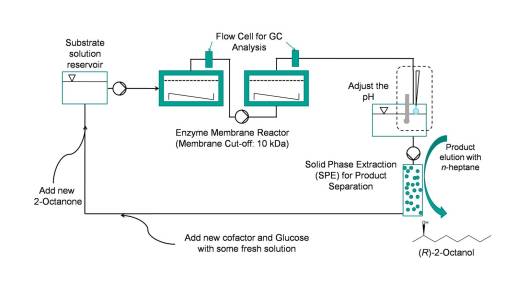 Figure 2: Flow scheme for the continuous production of (R)-2-alcohols

With a total runtime of more than 1000 h, high productivites for both enzymes were achieved (TONLbADH = 25.8x106; TONGDH = 5.9x106) with an enantiomeric excess ee>99.9 (R)-2-octanol. A detailed cost analysis demonstrated the high benefit of recycling the aqueous stream, but also revealed the high contribution of the cofactor cost to the overall cost. By using a model, based on initial rate experiments, conditions for a higher space-time-yield and better cofactor utilisation were elaborated.