Discontinuities in Oxidation Kinetics: A New Model and its Application to Cr–Si-Base Alloys 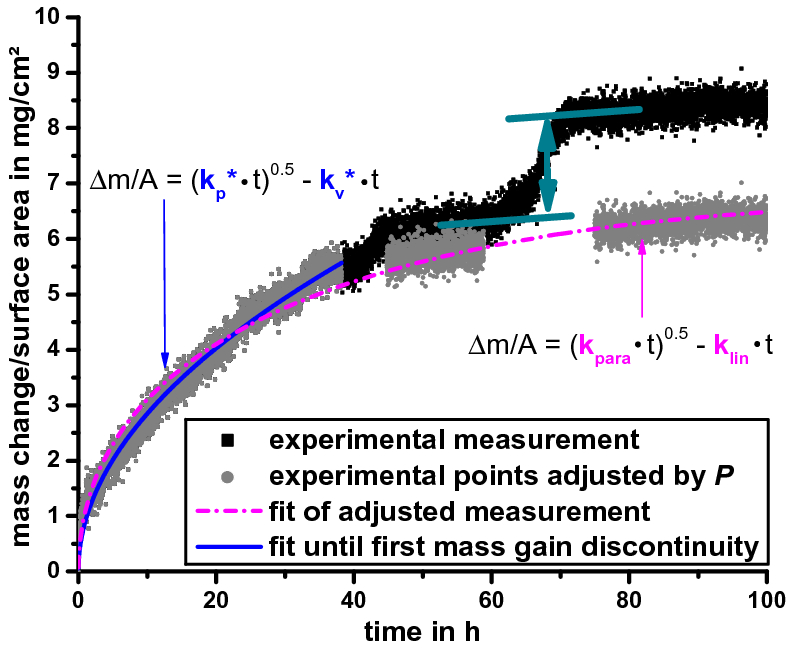 Some alloys such as many Cr-based systems show mass gain discontinuities during thermogravimetric measurements which strongly affect the oxidation kinetics. The behaviour cannot be described by the current models available in the literature. Thus, a novel kpara–klin-P-model was developed to describe oxidation kinetics during the isothermal exposure of materials which show such behaviour. Beside the parabolic rate constant kpara and the linear mass loss constant klin, the P-value and fP are introduced to take into account spontaneous rapid mass gains due to local oxide scale failure. The parameter P serves as a measure for the mass gain due to discontinuous events and fP is the frequency of such events. The both parameters can be related to oxide scale detachment and growth stresses. The application of the model is demonstrated for the oxidation of Cr–Si-based alloys in synthetic air at 1200°C for 100 h. For these alloys, the origin of the mass gain discontinuities is discussed and the meaning of P and fP is explained in more detail. Using this newly developed model, an insight into growth and nitridation resistance of oxide scales as well as scale adhesion is gained.