BioLyte: Development of electrolytes for redox flow batteries from plant-based redox-active compounds in bio-based solvents and an adapted galvanic cell for technical implementation

Stationary energy storage systems are a necessary part of a future energy supply structure with a high proportion of volatile renewable energies. Used in decentralized applications, they contribute to increasing resource efficiency and at the same time minimizing power supply costs. Further possible uses for stationary energy storage systems are for private, industrial and commercial users, on one hand to temporarily store their self-generated renewable electricity (e.g. photovoltaics) and on the other hand to smooth out peak loads and thus reduce electricity contract costs.

The energy storage systems most commonly used for these applications are of an electrochemical nature in the form of batteries or accumulators. So-called redox flow batteries (RFB) are particularly suitable for stationary energy storage in the short and medium term (Fig. 1). Here, the electrochemically active compounds are dissolved in liquids, the electrolytes are stored in large tanks and continuously pumped through an electrode unit where charging and discharging takes place. The advantage of this design is that the power can be scaled by the size of the electrodes and the amount of energy can be set independently and modularly scaled by the amount of electrolyte stored in the tanks. 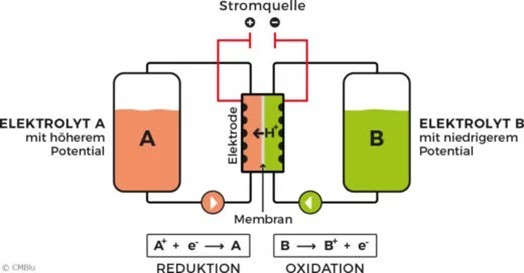 Metal salts or organic compounds synthetically produced from petrochemical products are usually used as electrolytes. On one hand, the extraction or production of these materials is usually not sustainable and harmful to the environment, on the other hand, due to their mostly toxic, corrosive and environmentally harmful properties, they also pose an environmental and health risk during operation and disposal of the battery.

The aim of this project is, therefore, the development of a sustainable and environmentally friendly alternatives for RFB electrolytes based on biological compounds. Plant extracted anthraquinones and other flavonoids are to be used as active substances (Fig. 2). In order not to compete with food production, these compounds should preferably be obtained from residual and waste streams of the food and animal feed industry.

Figure 2: Model redox reactions for the planned bio-based battery: electrochemistry of anthraquinones based on rhein found in rhubarb (above) and anthocyanins based on cyanidin contained in cherries (below)

The problem of the low water solubility of these plant-based compounds, which has occurred with this approach in the past, will be addressed by deploying an alternative solvent system, the so-called natural deep eutectic solvents (NaDES), which are also composed of bio-based components. The electrolytes produced in this way are therefore completely bio-based and can be obtained in a sustainable and environmentally friendly way. They are also non-toxic, non-corrosive and biodegradable.

Aims of the project are the systematic development of these biobased RFB electrolytes and optimization of the extraction process for the targeted components from the plant material. The new solvents are also to be extensively characterized in order to be able to evaluate their potential suitability for other electrochemical applications. In addition, a prototype unit for a later technical implementation (BioLyteCell) based on the bio-electrolytes is to be developed.