Liquid fuel such as methanol have an about 3 times higher energy density than that of 700 bar pressurized hydrogen. However several drawbacks such as poor kinetics of methanol oxidation and methanol crossover to the cathode drastically lower energy efficiency and fuel yield (figure 1) in Direct Methanol Fuel Cell (DMFC). One strategy to enhance overall efficiency consists on increasing cell working temperature up to 100-150°C. 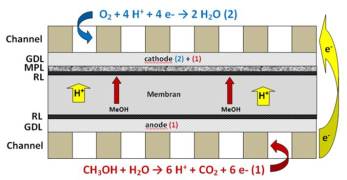 This project aims at the development of a middle-temperature DMFC (MT-DMFC) with reduced cathodic air pressure and is structured in three major fields. The first one is devoted to the development of novel polymer membranes with low methanol permeation rate (ICVT, University of Stuttgart). The second one deals with the preparation of highly efficient and selective carbon-supported Pt and Pt bimetal catalysts for oxygen reduction in presence of methanol (DECHEMA-Forschungsinstitut). The ultimate goal is the construction of a five-cells stack assembly (ZSW, Ulm).