Fuel cells are usually classified into working temperature categories. High temperature fuel cells (HTFC), such as the Solid Oxide Fuel Cell (SOFC) or the Molten Carbonate Fuel Cell (MCFC) are working in a temperature range of 600-950°C that allows a sufficient conductivity of the electrolyte. State of the art HTFCs have already shown high cell efficiency up to 60%. Low temperature fuel cells (LTFC) are mostly equipped with a polymer membrane such as Nafion whose conductivity depends on the presence of water molecules. Therefore, their working temperatures are usually limited to 80-90°C. With exception of MCFC that is specially designed for stationary electricity plans, both, high and low temperature fuel cells are planned to be used in a foreseeable future as energy converter for stationary and automotive applications. In the case of the LTFC, however, more robust systems able to work at 100-150°C and especially, more stable polymer membranes than PBI-based ones, which are still sensitive to cold starting processes, are needed. Higher working temperatures mean higher efficiency of the catalysts, lower electrolyte resistances and as a consequence higher cell performances. These depend not only on the working temperature, kind of catalyst and membrane, but also on the purity of the fuel and its distribution within the diffusion and reaction layers and also on the evacuation of the reaction products, which can lead to catalyst poisoning and electrode flooding, respectively. The latter depends on the morphology and properties inherent to the diffusion and reaction layers, such as catalyst loading, porosity, hydrophobicity, thickness and additionally on the compression forces within the stack. For these reasons, the design of the membrane-electrodes assembly (MEA) remains a very important step within the fuel cell concept. One distinguishes two strategies: the most common one consists on coating the electrodes with the diffusion and reaction layers (CCE) and finally press them together with the membrane to a MEA. The second one aims to directly coat the membrane with the reaction and diffusion layer inks or pastes (CCM). The choice of the coating technique depends among other things on the thickness of the different layers and of the kind of substrate. For thin layers like in the case of the H2 PEM anode, where usually 0.25 mg cm-2 Pt is used as standard catalyst loading, the screen-printing method is preferred. The spraying technique is more suitable if numerous coating steps are desired for example to achieve a catalyst gradient across the reaction layer.

Ten German research institutes with complementary competences are involved in a AiF/DFG- cluster project that aims at the development of a middle temperature polymer fuel cell (MT-PEMFC). The list of these institutes as well as the cluster structure are shown in figure 1. This cluster includes four subprojects (TP). The first one (TP1) aims at the development of novel polymer membranes that are able to work in the temperature range of 100-150°C. The second one (TP2) focuses on the preparation of more efficient carbon supported Pt and Pt bimetal catalysts for the oxygen reduction in the hydrogen (H2-PEMFC) and methanol (DMFC) fuel cells (TP2). Different coating techniques such as screen-printing, spraying, sputtering and galvanic deposition onto either the gas diffusion layer (GDL) or the membrane will be improved and compared with each others in TP3. The ultimate goal in TP4 is the construction of two stacks with working temperatures in the range of 100-150°C:

Figure 1: Organisation of the cluster with interconnection of the different TPs for material delivery timing and list of the involved institutes.

Description of the subproject "coating (TP3): Development of efficient coating techniques and electrode layers for a MT-PEMFC"

The main task for KWI in this project deals with the development of a spray coating process, which performs homogeneous and well-defined porous layer structures of mono-dispersed electrochemical Pt-based nanocatalysts for gas diffusion electrodes (GDEs). This process will be validated according scalability and reproducibility, and compared with other coating methods tested in TP3, such as screen-printing at HIAT, rotogravure at FILK and electro-deposition at FEM. To fulfil the requirements for the fabrication of GDEs for the direct methanol fuel cell (DMFC), a special spray coating device equipped with an ultrasonic spray head was acquired (see fig. 2). An intensive cooperation with ZSW is planned, where membranes will be coated with a conventional spraying technique. 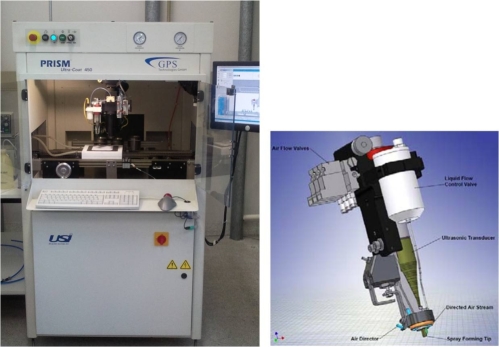 The project tasks are listed as follows: