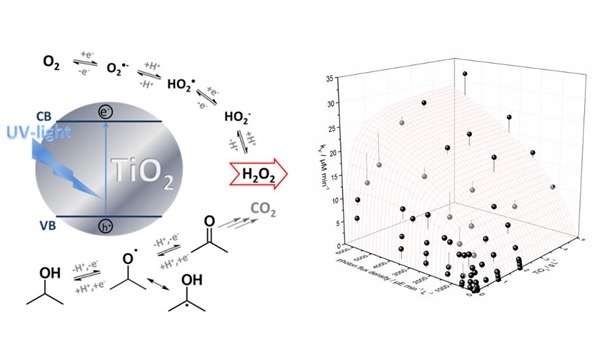 The study of the generation and use of hydrogen peroxide (H2O2) has a long tradition at the DECHEMA-Forschungsinstitut and is subject of many successful research projects. The Chemical Technology, Electrochemistry  and Industrial Biotechnology groups are working closely together on the topics of in situ H2O2 generation for coupled enzymatic processes, waste water treatment and synthetic applications. For the generation of H2O2 particularly electrochemical, photocatalytic and direct synthetic methods are developed and investigated.

The Chemical Technology group now succeeded in understanding the complex correlations of the different reaction parameters of the photocatalytic H2O2 production and developed a kinetic model to describe them in detail. Furthermore, those findings were used for a directed optimization leading to very efficient reaction conditions. Recently, the results were published under the title

in ACS Catalysis, one of the world’s leading catalysis journals. The paper originates from the research project „Photocatalytic in situ hydrogen peroxide production for biocatalysis based on peroxidases" which is part of the research cluster Integrated chemical-biotechnological production.

The researchers are looking forward to present new insights on this exciting topic in the nearest future.